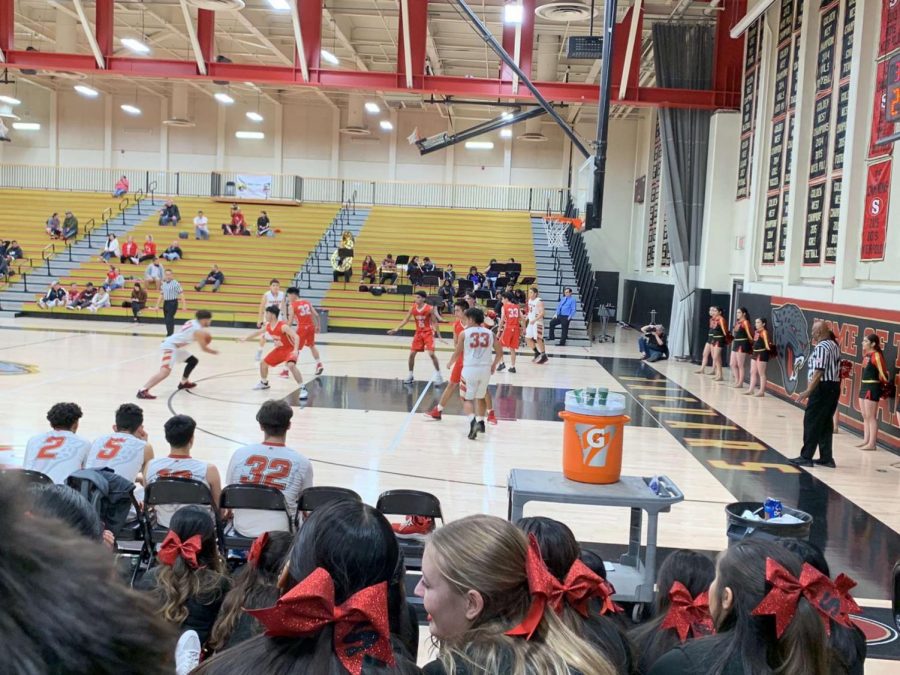 The final game of the winter season is boys basketball versus Garden Grove.

As the final week comes to an end of the 2019-2020 winter season, the Jaguars have dominated the field and shut down the courts.  From girls’ water polo to the field with soccer to the court’s for basketball, Jaguars have fought hard all season and have come away with multiple wins earning them spots in their league rankings.

With the end of their season, girls’ water polo has yet again walked away as league champions.  Not a single loss was marked for the team as they go on undefeated to become Golden West Champions and enter the CIF playoffs to determine their spot in all of Southern California.

“I feel like we had a great season overall, every team, we did have our ups and downs but we made it through united.  We can all improve in something individually, but as a team, we can further develop our skills on the field,” said Alexandra Vasquez (10) on the overlook this season for girls´ soccer.

Girls’ soccer has dominated the field leaving teams scoreless in league wins only being taken down by shortfalls.  The girls end the season with four wins, four losses, a single tie. During their last home game, seniors took the stage and defeated Ocean View to cap off their senior night. The season comes to an end with the girls tying for third with Ocean View in their league rankings.

“The mentality of my teammates helps me play with more confidence every game because I know when I pass them the ball, 90% of the time they’ll catch it and carry on the play.  My team’s effort is why we win most games and it has been a great experience playing with the girls on the team this year,” said Montse Alvarez (11) on the mentality for winning in girls’ basketball.

Girls’ basketball rules the courts every year, defeating any team who gets in their way by landslides. This season we saw the girls face their biggest struggles yet, but still, come out with a near-perfect record of 7 wins and 2 losses.  The girls walk away from their season placing second under Garden Grove’s girls’ basketball team who earned a perfect record of 9-0.

“The team has a very strong bond on and off the field.  We all get along and are good friends. The bond goes from being friends to teammates and helps us communicate and understand one another better. It also helps when someone makes a mistake because we don’t push each other down but suggest what they should do better next time so we can improve as a team,” said Ivan Zarate (1o) on the bond and abilities of boys´ soccer.

Boys’ soccer does what they do best and take the field by storm with their strong unity and talented performance that leaves teams left in the dust.  The boys end their season with only 3 losses out of 10 games and placing them third in the Gold West League rankings to cap off their season. Their final record was 3-3-4, three wins, three losses, and four ties.

“Our team season this year was full of ups and downs.  From wins to losses. But all in all, it has been a good season this year. It’s a brotherhood full of love, and encouragement. Next year’s changes would be to adapt to things quicker and be prepared for when the next season comes along,” said Jerson Quero (11) on this season of boys’ basketball.

Boys’ basketball raised the roof of every team they played because of their pure effort and aggression they came out with every night on the court.  This season the boys come away fourth in their league, but not due to low effort or skill. Each night every player who steps into the game comes out with obvious signs of exhaustion because of the determination and effort they play with each night.  The boys end their season 4-6 but do not walk away with their heads low as they held their ground against our rivals Godinez with only victories against the Grizzlies and no losses.