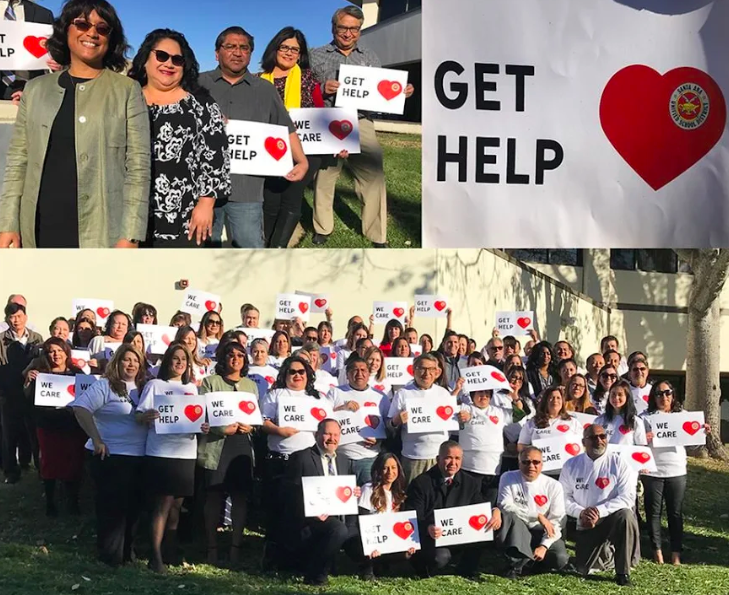 Awareness Week is a week dedicated to anyone who has any type of mental issues and needs help. This event is to let everyone know that asking for help is a brave move to make. Throughout the week, people can participate in spirit wear to support this. On Friday, there will be an event for the Mental Health Club after school. There are posters around the school with the Suicide Hotline 1(800)-273-8255.

We Care has been a program that started in 2017. Many SAUSD staff gathered around on December 6, 2017, to record a suicide awareness video that premiered on January 2018.

“Having our district have this type of event is good because there are a lot of people who need help, but are afraid to ask for it. Maybe some people won’t seek help due to maybe having trust issues but it encourages them, which I think is really good,” says Samantha Chavez (11).

Most people don’t trust others when it comes to talking about their problems, which is understandable, but it’s better to talk to someone than to keep it all in. Talking to someone about any problems you have going on is good because they can also provide advice and help if you need it.

“I have helped my friend who was dealing with depression in the past. It was something difficult to do as it was hard for my friend to open up about their problems and what they were going through,” says Jordy Ocampo (12).

Mental health is something really serious. It is a condition that regards the psychological and emotional well-being of a person. Many people deal with mental illnesses without others knowing about it.

Mia Calvillo says (11), “I’ve dealt with my own mental issues and I still am.”

Many people get triggered when someone tells them to “Get Help.” The district should set up events and offer support that may help someone out like journals to write in.

Calvillo continues, “I think SAUSD having a We Care week is crucial because they’re the ones deciding when they should care or not. Just saying ‘Get help’ triggers some people because a lot of the time when someone who deals or has dealt with mental issues has tried to reach out to someone. The person they trusted initially says to get help when all we wanted (those who are ill) was for someone to just hear us out and go on about their day. For me personally, if the district actually ’cared’ then it shouldn’t only be a week-long purpose, but something that becomes part of school spirit in a way, like setting up events or offering journals to write in and things like that.”

I think there are definitely other ways the District could go about things like this. Mental health should always be a top priority of theirs and shouldn’t just be a week long event.