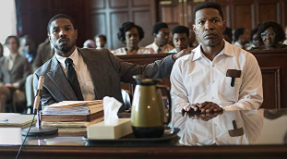 The movie Just Mercy is a reenactment about the case of  Walter McMillian, played by Jamie Foxx, a black man who spent nearly six years on Alabama’s death row after being convicted of a murder he didn’t commit.

The movie stars Michael B. Jordan as Stevenson, a current graduate of Harvard Law School who arrives in Alabama in the late eighties with a mindset taken for naïveté (lack of experience, wisdom, or judgment).  Stevenson tries to talk to Walter McMillian, who in 1987 was arrested for a murder he didn’t commit, but who was railroaded by a racist and incompetent legal system in Alabama, but it seems like he lost all hope for himself as he shuts down Stevenson’s help. Stevenson anyhow seeks for McMillian’s family to try and convince him to change his mind. Walter then allows Stevenson to help in his long journey to liberty. There were many obstacles to overcome but in the end, Stevenson, with the help of Eva Ansley (Brie Larson), won the case and helped free Walter McMillian.

Just Mercy was rated 83% on the Tomatometer to which I agree with. I think this movie conveys the injustice many people of color have to go through with law enforcement. Each actor portrays their character very well. This movie will keep you on the edge of your seat because of all the stressful events.  From its easy visuals to its superb performances, the movie Just Mercy is masterfully built to maintain the audience in a story that, in any other case, would be too brutal to bear.