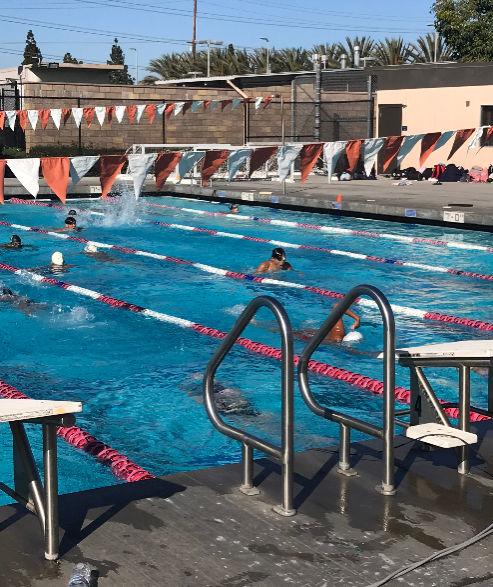 Segerstrom's swim team warms up in the water before the meet begins.

“I am feeling very pepped. Everyone is super excited for this meet and to do well. It is the first of the season, so there are definitely some expectations on how we will be performing,” Diana Hernandez, a 10th grader on Segerstorm’s varsity swim team, says.

However, the meeting did not go as well as planned. Sage Hill won almost every Varsity girls and Varsity boys heat despite Segerstrom’s best efforts. However, they had a little more success with the Junior Varsity girls’ division. Most JV girls’ heats ended with a Segerstrom victory.

“It was a very competitive meet versus Sage Hill. I did very well in my 100 free, but I did horrible on my 500 freestyle. Our varsity team is looking good and looking at some new records to be broken,” says Christopher Vasquez (11). Christopher is one of the top varsity members at Segerstrom High School.

The Segerstrom team seemed especially enthusiastic during senior Jonathon Khu’s event of 100 freestyle. Khu is an instrumental part of the Segerstrom team, often assisting other teammates with their stroke technique and leading practices.

A group of six to eight people crowded around Jonathon’s lane to cheer for him- the team never felt more united and together during that meet. The swim meet had an energy and a feel that was indescribable.

“I think that Khu’s race was definitely a highlight of the meet. He is so good at swimming, so it is fun to see him race,” says Diana Hernandez (10).

Despite the losses our Jaguars faced, they were able to keep an optimistic attitude through the solidarity amongst their swimmers. There is hope for our varsity team as they prepare to have a meet against Los Amigos High School on March 7th.