Feel the Bern at Valley 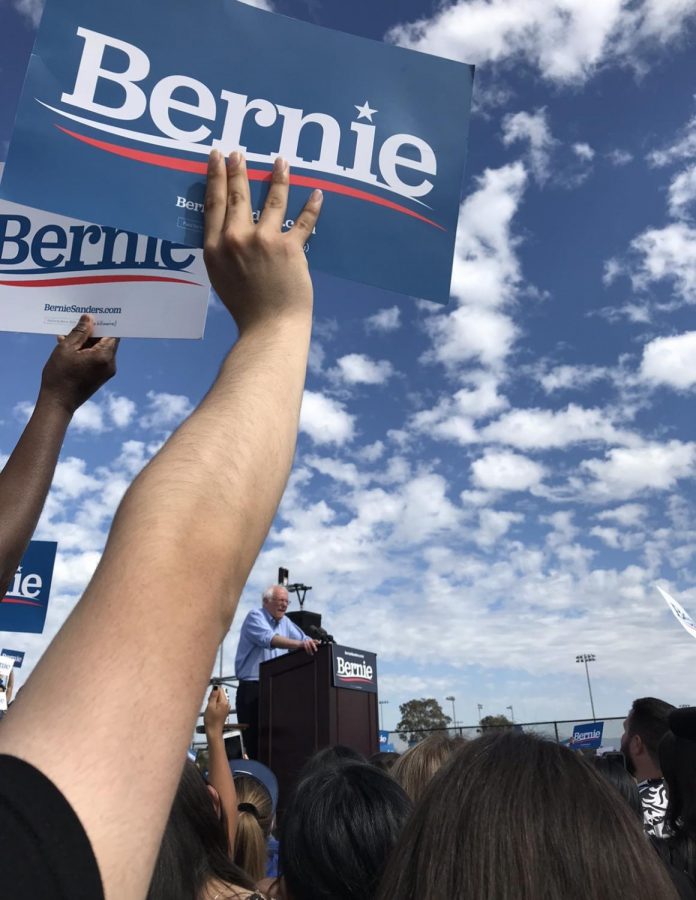 Bernie beginning his rally with thousands of people cheering him on at Valley High School.

On Friday, February 21st, Bernie Sanders came to Santa Ana and had a rally at Valley High School. The event was due to start at 11:30 A.M. and finish at about 1:30 P.M.

The high school was surrounded by many police officers as it was such an important event with an equally important person, Bernie Sanders, presidential candidate. The doors were due to open at 9:30 A.M. and many people were already in line waiting to get in.

As people were in line, many volunteers were walking around trying to get registered voters to sign many petitions. Before the event, a car passed by with its window open and the driver yelled, “Four more years! Four more years!” The looks of disgust and annoyance resonated through the crowd, but no one said anything and just like that, the happy and exciting atmosphere appeared.

There was security at the entrance checking bags and making sure it was the safest environment possible. There were volunteers of all ages standing on the side and cheering those who walked into the venue, they were high-fiving them and thanking them for being there. Signs and stickers were given out to the crowd.

That Friday morning, the sun was out and shining. It would be sweltering hot, but then the sun would hide behind the clouds for a few moments and let the crowd enjoy the coolness of the wind. After minutes of standing, people decided to sit down and rest their legs before the big event had begun.

Speakers from different organizations spoke before Sanders appeared and all told their personal story of why they were supporting Sanders and each of them emphasized the importance of the primary elections and how to get involved and help support Sanders campaign.

When the announcer stated Sanders was here, everyone went crazy and started looking for him. Phones were pulled out and cameras were all waiting for him to walk out. “Bernie! Bernie! Bernie!” was heard throughout the entire basketball courts as he began to walk out. Some people started crying as others stood there with shocked faces.

Sanders then began to talk about the promises he had given during his campaign.