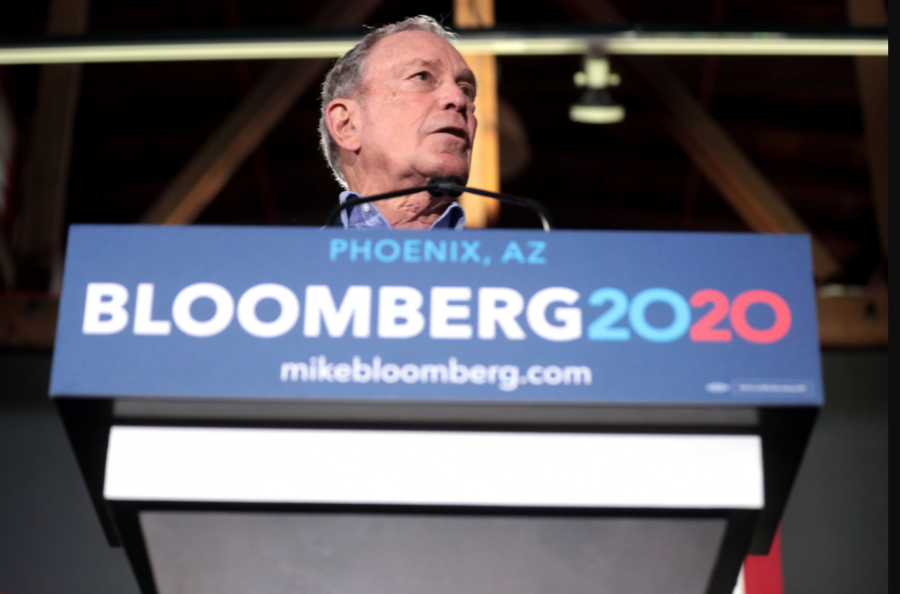 Mike Bloomberg on his presidential campaign talking to his supporters. Photo courtesy of: Wiki Commons

“Today I am ending my campaign and endorsing Joe Biden for president,” said Amy Klobuchar.

“I’m gonna be real, I’ve never even heard of her. I’m not big on politics but it’s just common sense that the more people know your message and know who you are the more likely they are to vote for you,” said Jose Medina (10)

Klobuchar plans to endorse former vice president Joe Biden in his campaign. She called her campaign early in an effort to allow Biden to take the state of Minnesota. Klobuchar wants to make sure that Bernie Sanders does not win this election and she has made it clear.

“From my home state of Minnesota, vote for Joe,” said Amy Klobuchar

Klobuchar had rough times in Iowa, Nevada, and South Carolina. Surprising her competitors she was able to snag a third-place finish in New Hampshire finishing ahead of Biden and Warren.

“We have been really, really beating the odds,” said Amy Klobuchar.

Another Democratic candidate in Mike Bloomberg also called it quits. Bloomberg struggled at Super Tuesday and after spending $500 million on his Super Tuesday campaign he decided to suspend his campaign.

“Today, I am leaving the race for the same reason: to defeat Donald Trump – because it is clear to me that staying in would make achieving that goal more difficult,” said Mike Bloomberg

Mike Bloomberg has made himself known thanks to his online presence. His ads have been all over social media, and especially YouTube,

“I’ve always seen his ads on YouTube and it’s kind of dumb to me because most people who are on YouTube are kids or teens who don’t care and even if they do care they can’t vote so I think it’s just a huge waste of money,” said Daniel Acosta (10)

Bloomberg just like Klobuchar and Buttigieg has decided to endorse former Vice President Joe Biden. Biden in recent days has gone from someone who really wasn’t taken seriously to now someone who could seriously get the nod for the Democratic candidate.

“I’ve always believed that defeating Donald Trump starts with uniting behind the candidate with the best shot to do it. After yesterday’s vote, it is clear that candidate is my friend and a great American, Joe Biden,” said Mike Bloomberg

Biden is certainly going to get a big boost from having Mike Bloomberg endorse him. Bloomberg and his big presence will make more people vote for Biden and with Thursday’s announcement of Elizabeth Warren dropping out of the race as well, that leaves only Tulsi Gabbard, Bernie Sanders, and Joe Biden.

“Mini Mike Bloomberg just “quit” the race for President. I could have told him long ago that he didn’t have what it takes, and he would have saved himself a billion dollars, the real cost. Now he will pour money into Sleepy Joe’s campaign, hoping to save face. It won’t work!” tweeted President Trump on Wednesday

Elizabeth Warren was the latest person to end her campaign recently, Warren similar to the other two ended her campaign thanks to a weak Super Tuesday.

Warren has ended her campaign and has also decided to endorse Joe Biden. Warren’s drop out was very similar to Bloomberg and Klobuchar, many people have called for Joe Biden to name Elizabeth Warren as his running mate following the news.

“Our work continues, The fight goes on, and big dreams never die,” Warren told her staff.