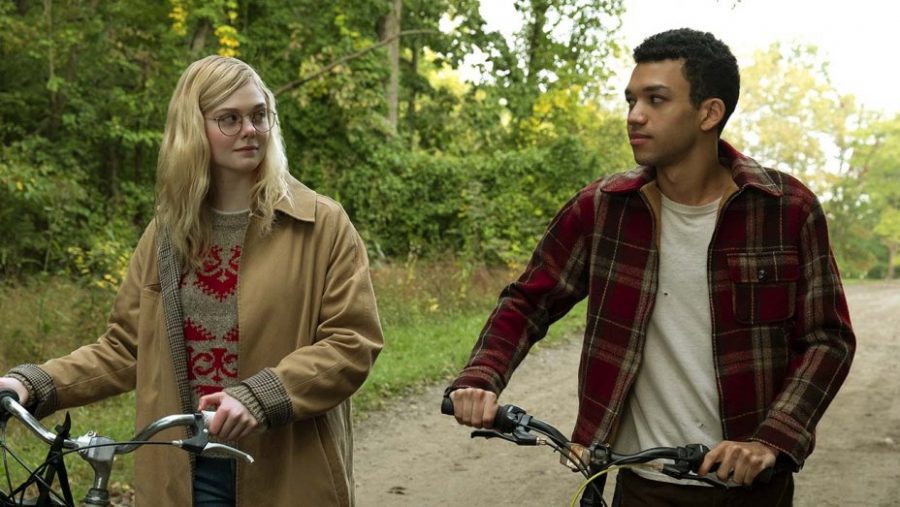 Violet (Elle Fanning) and Finch (Justice Smith) walking together in the woods.

The film begins with Violet, played by Elle Fanning, standing on the ledge of a bridge contemplating taking her own life. A classmate of hers named Finch finds her there while jogging and joins her on the ledge as he tries to talk her down by joking with her as he balances on the ledge on one foot.

All the Bright Places is the film adaptation of the 2015 YA novel by Jennifer Niven. The premise of the story consists of the main characters dealing with mental illness, grief and childhood trauma. Violet’s older sister had died in a car crash which she had survived. Violet seems to have survivor’s guilt over the accident as she feels she’s not allowed to be happy when her sister is dead.

Finch, played by Justice Smith, is an outcast at school, with others having given him the nickname Freak. Finch has been labeled as a problem child due to his various violent outbursts and antics. Finch has childhood trauma from his father’s beatings he had inflicted on him as a child. Finch describes an unnamed mental illness in which he is “not awake” anymore. He describes these episodes as one’s in which he is left with no recollection of what happened, which scares him.

Finch pursues Violet in the beginning and tries to get her to open up by getting her to do a project with him. Violet eventually agrees, and they go out to explore and write about fascinating places in Indiana.

The film touches upon delicate subjects in an artful way through Violet’s and Finch’s stories. They didn’t do so well with the secondary characters as they were essentially backdrops for Violet and Finch as the film failed to fully flesh out their secondary characters.

I would rate the film a 4 out of 5 stars as it was a touching story but had some flaws in characterization. The film runs for 1 hour and 47 minutes and can be seen on Netflix.