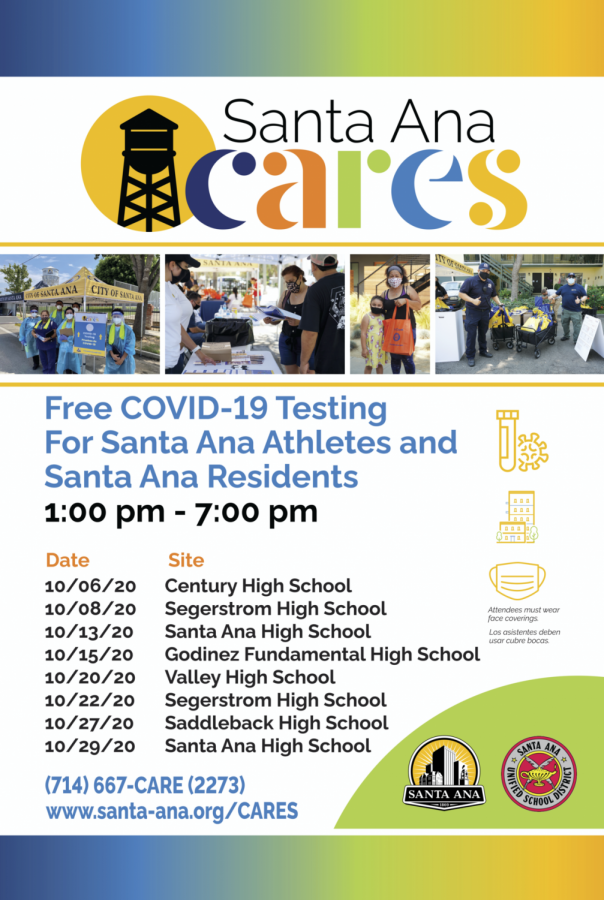 Santa Ana CARES has now brought free testing for COVID-19 to schools in SAUSD, allowing appointment-free tests to anyone living in Santa Ana.

Starting from 1:00pm and ending at 7:00pm, Santa Ana CARES offers COVID-19 tests in high schools on specific dates. Segerstrom High School has its own upcoming dates, with testing available on October 22nd and Flu shots on the 29th.

The program requires the use of masks and social distancing at all test sites. Tests kits will be given and used by the person themselves. Anyone under 18 needs to have a parent or guardian with them to be tested.

Santa Ana College is another recurring testing site, available on Wednesdays, Thursdays, Saturdays, and Sundays. People that decide to be tested at the college are required to show identification via proof of Santa Ana residency and are expected to make an appointment by calling (877) 362-9779.

Santa Ana Mayor Miguel Pulido says, “We’ll do a variety of things. We’re going to be handing out test kits, sanitizer, masks, but also, at the center, we’re going to be providing information about rental assistance.”

According to Mayor Pulido, there are more than one hundred thousand kits that will be distributed among Santa Ana residents. Notices will also be given out beforehand to residents within the area for the centers.

Created last August, Santa Ana CARES primary goal is to assist residents with their health or financial problems that had occurred due to the pandemic. A hotline is available for people that need more information about specific services: (714) 667-2273.

As of October 10th, there have been more than ten thousand cases in Santa Ana, with a total of more than one thousand people that have died in the area of Orange County.

Mayor Pulido says, “We really need to mask up. If we mask up, we’re going to beat this virus.”