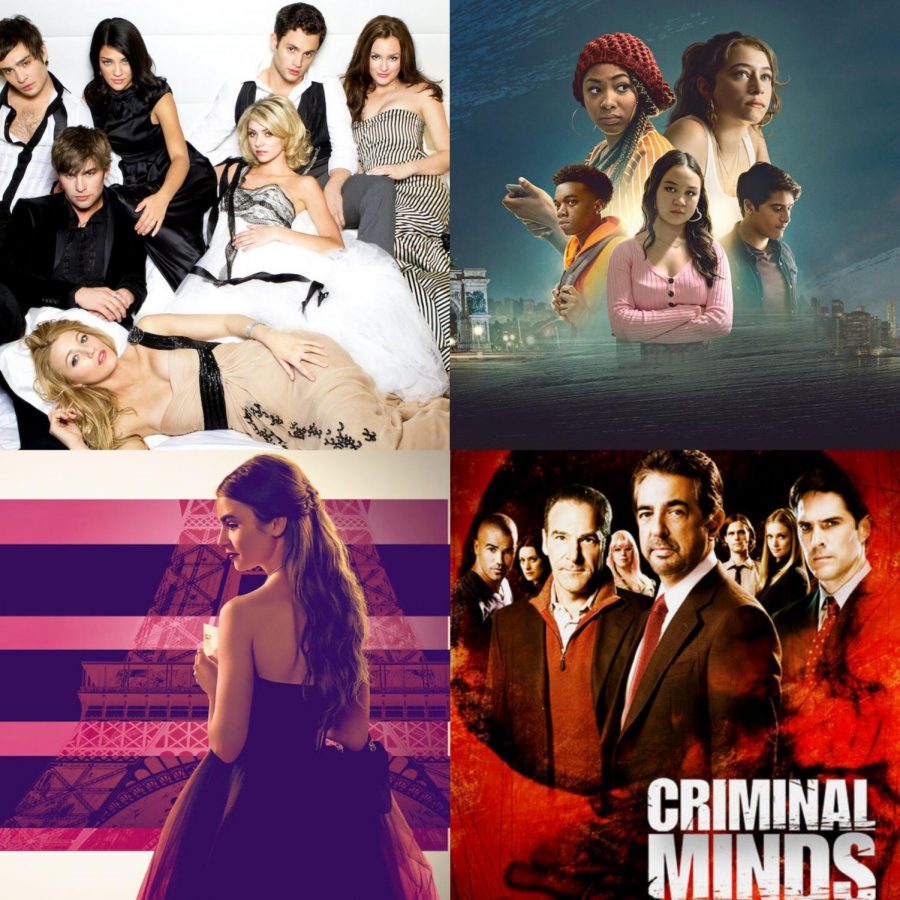 The main cast is shown, and all shows are available on Netflix. Photo Courtesy of: netflix.com and dvd.netflix.com

As of 2020, it feels as if more time was given throughout the day. Though it’s hard to believe that Thanksgiving and Christmas are almost upon us, it means that even more time is left on our hands. Some decide to be productive during the break, while others decide it’s the best time to binge-watch shows in one sitting.

The hit TV series, Gossip Girl, first aired in September of 2007 on The CW and ended in December 2012. The show was based on books written by Cecily von Ziegesar of the same name. It lasted 6 seasons and has about more or less 20 episodes each season with season 6 being the shortest with 10 episodes. Gossip Girl follows the lives of Manhattan’s Upper East Siders and blogger “Gossip Girl” posting their secrets and stirring the pot. The show has an aura that instantly catches the attention of viewers and the mystique behind it makes you want to go along with it to see the drama unfold. Hurry and watch in time to catch the addition of Gossip Girl (2021) taking place in current day Manhattan, where much has changed since “Gossip Girl” was last seen.

Many have compared the Netflix original to HBO’s Euphoria (but without the glitter). The show revolves around the lives of 5 teenagers (Joey Del Marco, Dom Pierre, Sid Pakam, Jayson Jackson, and Leila Kwan Zimmer)  trying to figure out their place in the world while going through their own personal conflicts. It was based, loosely, on a play titled SLUT: The Play written by Katie Cappiello, the show’s creator, writer, and executive producer. The show was very different from what is seen because it actually felt like teens desperately trying to discover their identity and being pressured by high school. The show explores sensitive topics and brings out the flaws that still exist in today’s society.

First released in October 2020, the Netflix series stars Lily Collins as Emily Cooper, an American who moves to Paris for a French marketing firm. In this comedy-drama, Cooper discovers that working in Paris may not seem as glamorous as she pictured due to the differences she first experiences since moving from Chicago. There, she is to provide an American point of view on the newly acquired firm but, at first, she struggles to connect with her coworkers and make friends in a new country that she doesn’t speak the language of. Although much backlash was received due to the poor portrayal of French people and basically the plot of the show, it was renewed for a second season.

The fifteen season series ran for about 15 years, starting in September 2005 and ending only recently in February 2020. The show is based on the BAU (Behavioral Analysis Unit) and the profilers who are solving cases in every episode. The team themselves all bring different strengths to the table as they profile their unsub. Criminal Minds conveys many different emotions and shows many different sensitive subjects that may be disturbing for some. The show may seem long, but every episode always has a different feel with different mysteries that is easy to follow and can’t wait for more, especially with such interesting and complex characters.