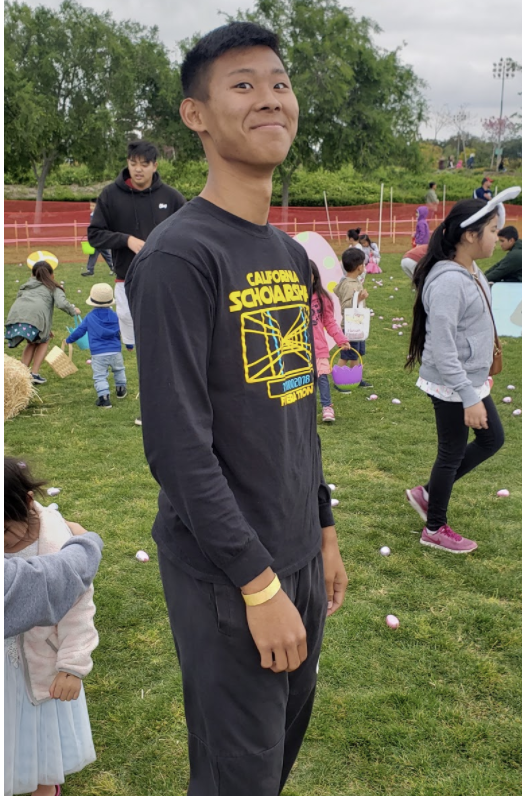 Anderson Truong smiles for the camera as he is volunteering for the Fountain Valley Easter Egg Hunt. Photo courtesy of: Anderson Truong

Anderson Truong, a senior at Segerstrom High School, has recently been accepted to UC Berkeley and Cal Poly Pomona. Truong has had a tremendous impact on Segerstrom as one of the school’s top students. As well as on varsity tennis for two years, he is the vice president of the California Scholarship Federation for Segerstrom, bulletin editor for Key Club, and the secretary for the Robotics Club. Last year, he competed in the JPL Invention Challenge and was accepted to the JPL SpaceSHIP internship program before it was canceled due to COVID-19. Demonstrating a clear interest in the STEM field, Truong is on track to becoming an electrical engineer.

Although he is leaving next year to college, Truong has plenty to say to future students about his experience at the high school.

1. What is your best memory at Segerstrom?

My best memory at Segerstrom was shooting ping pong balls with our paintball gun propulsion in the physics backroom for the Invention Challenge. When we tested our launcher, a few teachers heard the blasts down the hall and came to check it out.

2. What advice do you have for next year’s seniors?

Don’t delay your college apps. You should start working on them in August and finish them by October so you won’t get overwhelmed when the workload gets worse. Be genuine in the essays on your apps and write a bit less formally. Also, make sure to get recommendations from your teachers early so they have time to respond.

3. Advice for this year’s freshmen?

Get involved with clubs (definitely apply to board positions) and find some hobby (or hobbies) that makes you stand out from, I’d say, 80-90% of other students. This will make it easier for you when you’re writing college essays. If you’re into engineering or STEM, try to teach yourself a few programming languages or frameworks.

4. What are your plans for after graduation?

For undergrad, I plan on studying electrical engineering. For graduate school, I’m planning on an M.S. in some engineering field (depends on what I’m interested in at the time). I might look towards a doctorate in control theory or machine learning, but that depends on my life situation.

Brendan and Thomas, thanks for being goons with me for the past 7 years. Mr. Werdel, throwing out stuff from the math building backroom at the end of the year was pretty fun. Mrs. Mateo, the extra credit was way too overpowered. Not doing the final dropped my grade from 110% to 99%. Mr. Woods, every project was a blast to do. I really wish we could’ve at least finished the rocketry project or began the autonomous rover project before the quarantine.