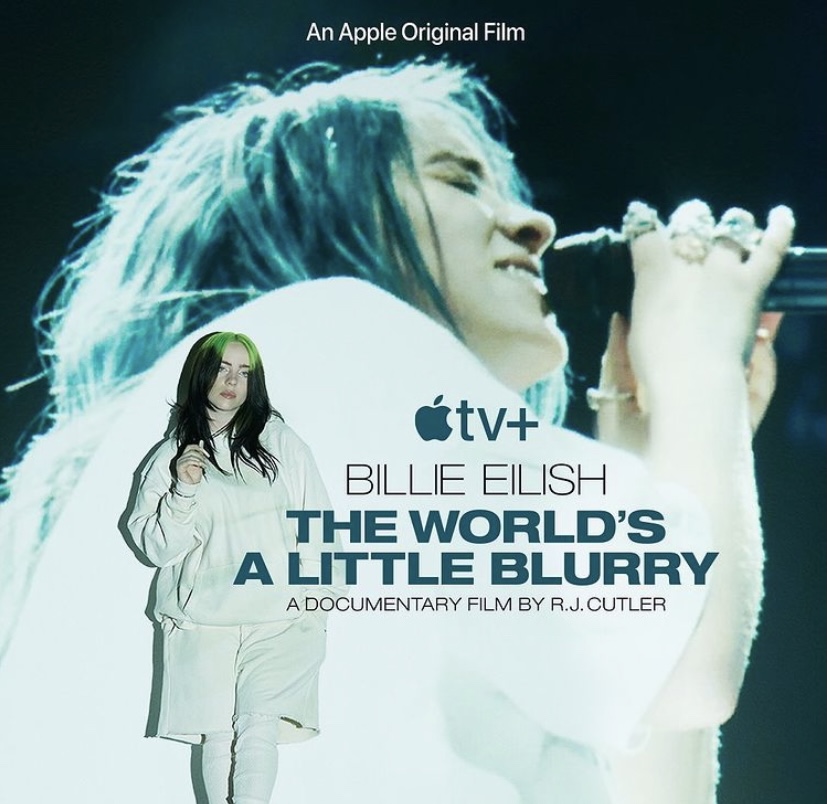 Billie Eilish posted on her Instagram to announce her documentary Photo Courtesy of ; Billie Eilish instagram @billieeilish “coming out soon. i can’t wait for you to see this film 2/26 on apple tv+”

Many artists have come out with documentaries that capture behind the scenes of what goes on with their career. These include notable names such as Travis Scott, Taylor Swift, Justin Bieber and many more. 19-year-old pop star Billie Eilish took it to another level. In her documentary titled The World’s a Little Blurry , she really goes into detail about what goes on behind the stage and her daily life leading up to when she wrote her album and also the struggle she faces along the way.

Raised in a tiny house in Los Angeles’s Highland Park neighborhood, Eilish was homeschooled. Her father was a construction worker, and her mother was a teacher. Both parents had small acting roles, played music, and cultivated a creative atmosphere in the home. As a result, Eilish and her older brother, Finneas, developed a fondness for music and performance. Eilish and Finneas wrote most of her debut album together in his bedroom.

The documentary was filmed during the lead-up to and aftermath of her debut album, “When We All Fall Asleep, Where Do We Go?” It captured Eilish as she struggled to finish the record, fumbled through live shows, and suffered injuries that undermined her ability to perform. It also showed her attempts to sustain the attention of her now ex-boyfriend, Q. Eilish didn’t always get attention and love from Q so she would try her best to get what she could, which was mostly phone calls and little appearances. Eilish and Q were more like long distance, they rarely show each other and when Eilish tried to be with him Q was always somewhere else with other people other than Eilish.

The film is partly designed to show how she came to be an artist. She works on her music mainly with her brother and records in the comfort of her own home. Finneas is four years older than Billie and is  her best friend, closest collaborator, and protector. Finneas’ task is not only to be Eilish’s brother but also to help turn her into a pop star while enclosing her from anything that might compromise her from reaching her full potential as an artist. At one point in the film, under pressure from Eilish’s label, he’s in distress and copes in private.

“It feels kind of like a minefield to me,” he says. “I’ve been told to write a hit, but I’ve been told to not tell Billie that we have to write a hit. But Billie hates writing songs in general, and, you know, is, I don’t know, so woke about her own persona on the Internet, that I think she’s terrified of, like, anything that she makes being hated.”

She’s well versed in the language of mental health and speaks openly about her struggles with depression as well as her experience with Tourette’s syndrome, which she says once caused her to bite down on a piece of glass.

Overall, the documentary was astonishing, it really captured what it’s like to be an artist and the struggles that go along with it. Many fans think artists are lucky to live in the world they live in, and it can be. However, it also comes with its own set of struggles.