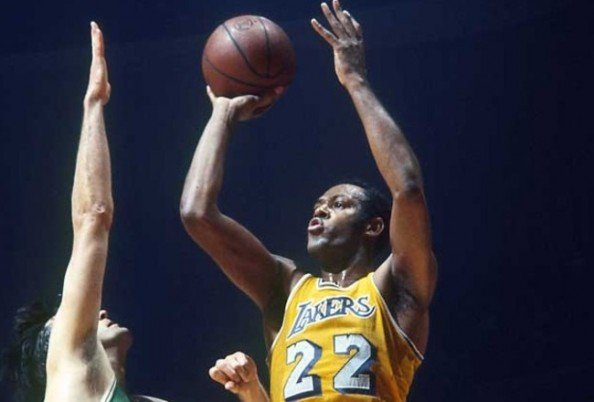 "The Godfather of Hangtime At his best". Photo courtesy of: Base and Baskets

On Monday, March 22nd, 86-year-old Lakers legend, Elgin Baylor died from natural causes. Elgin Baylor was elected into the Hall of Fame and was the head coach of the New Orleans Jazz from 1976 to 1979 and then from 1986 to 2008. He was also  the general manager of the Los Angeles Clippers. In 2006, he was announced as NBA executive of the year.

Throughout the 1960s, he played 14 seasons with the Lakers. He was named Rookie of the Year for the 1958-1959 season and was an all-star 11 times. During a finals game against the Boston Celtics, he scored 61 points, securing his name in the record book.

“Elgin was the superstar of his era, he was a man of great integrity, he will always be part of the Lakers legacy,” says Jeanie Buss, the Lakers CEO.

When he was in high school, he dropped out and worked at a furniture store. Despite these humble beginnings, he later attended Seattle University in 1956 and led their team to the 1958 championship. He was named the best player in that final. He was drafted in 1958 and was one of the first black men to be drafted into the NBA.

The Lakers were led to eight NBA Finals by Elgin Baylor before his retirement. A statue of him still remains outside the Staples Center.

“I was awe of his immense courage, dignity, and the time he gave to all his fans,” says Elain Baylor, his wife. Elgin Baylor had 3 children while married for 40 years to Elain Baylor.

He will always be remembered as “The Godfather of Hangtime,” a legend, and one of the greatest to ever play the game.