The Jag Journal • May 4, 2021 • https://segerstromjagjournal.com/2028/news/caitlyn-jenner-running-for-office/ 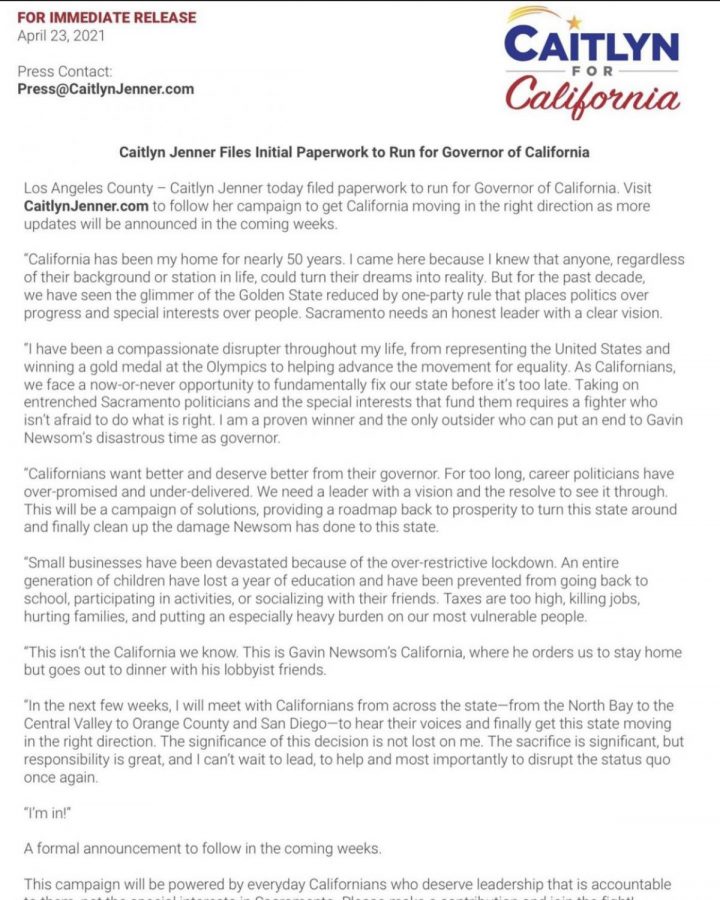 Photo Courtesy of; Caitlyn Jenner Instagram @caitylnjenner “I’m In! California is worth fighting for.”

Caitlyn Jenner, formerly known as Bruce Jenner, is a former Olympic athlete, reality TV star, and now transgender activist. She has announced on her website that she will be running for governor against current governor, Gavin Newsom.

On Friday, she announced on her website, “ I’m In! California has been my home for nearly 50 years. I came here because I knew that anyone, regardless of their background or station in life, could turn their dreams into reality. But for the past decade, we have seen the glimmer of the Golden State reduced by one-party rule that places politics over progress and special interests over people. Sacramento needs an honest leader with a clear vision.”

Jenner felt compelled to run for office, as she believed that Newsom wasn’t taking the pandemic seriously, and felt that the citizens of California deserved better than what he was doing. The LGBTQ+ community won’t be backing her up in this election, as some members of the community wouldn’t vote for someone so affiliated with anti-LGBTQ policy since Caitlyn was a former Trump supporter. To add on top of that, she has surrounded herself with a team of former Trump aides. Besides the LGBTQ+ community’s lack of support, others don’t trust Caitlyn running for the right reasons and say that her bid was a “vanity campaign.”

With Caitlyn Jenner getting so much backlash with her sudden post of running for office, former 38th governor Arnold Schwarzenegger, also famously known as an actor and bodybuilder has come out to support her. Schwarzenegger says, “I’m very good friends with Caitlyn. I have the upmost respect for her…Well, you know, anyone has a chance. Doesn’t matter if it’s Caityln or it’s anyone else, you have a clear vision of where you want to go, what are the kind of changes you want to make and why are you qualified to become governor?”