The Sexism Behind Sadie Hawkins 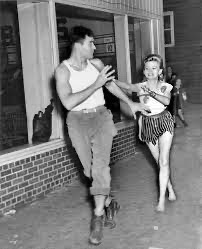 A girl chases a boy in honor of Sadie Hawkins Day. (Image courtesy of Wikipedia)

Avery Ngo and Isabella Do

Last week, Segerstrom High students were given a choice between two types of school dances: winter formal or Sadie Hawkins. For the past few years before the pandemic, the school has traditionally held winter formal dances.

Winter formal is a dance with overall formal attire, including dresses, gowns, tuxedos, and more. Students from all grades are welcome to attend it on on January 29th. Sadie Hawkins, on the other hand, would take place on February 5th. It would be a  “girls-ask-boys” dance with casual wear, including jeans, shorts, and t-shirts.

“I like both. I like Sadie Hawkins because it would give me a chance to ask my boyfriend out, but I also like winter formal because it’s pretty, elegant, and an excuse to go shopping,” says Yalena Watrous (12).

But when it comes to Sadie Hawkins, the idea that the dance was once lauded as a feminist notion is appalling in today society. It highlights archaic gender norms by suggesting that girls asking boys to a dance is uncommon.

Looking at the history of the dance, this is unsurprising. The Sadie Hawkins dance came from the cartoonist Al Capp, in his character Sadie Hawins. Sadie was the “homeliest  gal in all them hills” and the daughter of Hezekiah, the wealthiest man in the town.  Seeing how Sadie’s repulsive appearance frightened men away, Hezekiah declared a “Sadie Hawkins” day where all unmarried men were to be chased by Sadie. If Sadie caught one, he would have to marry her.

The concept of a woman’s worth being dependent on her looks is sexist and derogatory. It reinforces girls’ insecurity over their looks in an already oversexualized world. Especially with the rise of social media and photoshop, the standard of beauty for women has become unattainable.

In spite of the history behind Sadie Hawkins, Nguyen has a more traditional take on it. He says, “I still think it’s a cool idea because girls can ask out guys. In this day in age, I do think that photoshop and Instagram have created higher beauty standards because so many people can access Instagram and look at pretty girls.”

Watrous agrees, saying, “Social media plays a huge impact in what the ideal beauty is. With social media, everyone has the will to be someone else because of social media to have the prettiest body.”

But with this already fragile relationship between a girl, her body, and beauty norms, organizing such a dance with a history that exploits these vulnerabilities should be reconsidered.