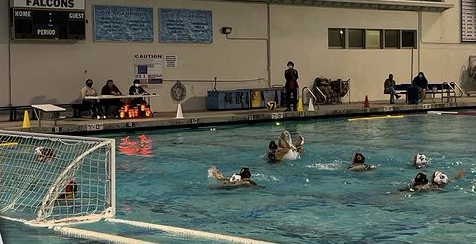 As the season is coming to an end, the Segerstrom Girls’ Water Polo team is going to CIF. This month, CIF started for the water polo teams. After lots of hard training, girls’ Water Polo went to their first CIF game.

“I am really glad that we got into D2 because once I get into varsity, I might get scouted by a lot of colleges,” said JV water polo player, Yaniz Nunez (9).

During the entire season, the water polo team scored 8-12 overall and 5-2 in the league. With these standings and being in the second division, the team is doing really well. This really shows how hard the water polo team trains to make it to CIF and how dedicated they are.

Everyone trains hard if they are in D2 and going to CIF, but how does Segerstrom’s water polo training differ compared to others? Well, they had a much busier season than others; The water polo team would practice from 2:40 to 5:45 PM every day of the week and practice in the weight room from 6:30 to 7:30 AM. Unfortunately, the pool broke and needed repairs. This setback made it more difficult for some of the girls. After the pool broke, the team had to practice at Saddleback High School from 6 to 8:00 PM.

“It was very hard because I don’t live in Santa Ana and I leave practice at 8 PM, then take an hour to get home, then study and do homework. It’s just a lot of work and trying to maintain my straight A’s is hard,” said varsity player Celeste Carmora (9).

The first game of CIF was held on February 8th, and the girls went up north to compete but lost the game. However, their resilience and hard work are what has gotten them to CIF. We’re extremely proud of our water polo team and all their hard work. Congratulations girls!