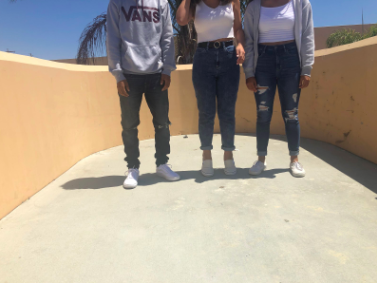 Three students, who wish to remain anonymous: Two “out of dress code”

To most upperclassmen, the disciplinary assembly is a bore. The school’s administration reviews standards and rules that many have heard in past years. Students listen to the same lectures and advice that we are expected to follow during our time at Segerstrom. For the most part, students take no issue with the set regulations.

That is until we get to the topic of the dress code. It is no shock that numerous students have a problem with the restrictions set on what they can and cannot wear, but for female students there especially seems to be a feeling of dissent.

When the vice principal finally arrives on the topic of dress code on his PowerPoint, almost every rule seems to be aimed at females. He even tests the students by showing pictures of girls with what he deems inappropriate clothing and asks the students whether or not that article of clothing is allowed. Why is there such a focus on the clothing of girls?

An eleventh grader, Andrea Godinez, states, “they never talk about what the boys can’t wear. Everything they say is directed to the girls, [but] my style shouldn’t be restricted just because of my gender.”

While there is no real answer pinpointing why female students are more restricted in what they wear, there is one thing we know for certain: male students don’t receive as many repercussions for their clothes. I cannot count the number of times I have seen a boy walk into a classroom of mine, in ripped jeans or a shirt with graphic images, and not be dress coded. Meanwhile, girls wear a sleeveless shirt revealing nothing but their shoulders, and they get dress coded numerous times in one day. It all boils down to gender. Whether or not the school intends to single out females on their outfits, the teachers and students interpret it in that manner. It all ties back to the past view that women who showed skin would distract their male peers.

“What’s so special about shoulders that we have to cover them,” Andrea huffed in annoyance. “If we’re going to accommodate to avoid distracting boys, then they too should accommodate the things they say or wear.” It is important to acknowledge that there may be clothes or styles that are distracting. However, wearing distracting articles of clothing are not limited to only females.

As we continue through the school year, we should ensure that school administration officials dress code based on the rules and not based on gender.