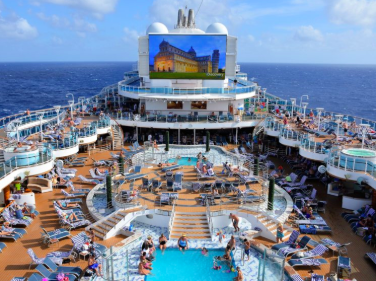 On board the Royal Caribbean, its visitors relax contentedly.

There are too many sexual assault crimes happening on board cruise ships. In 2018 alone, there have been 120 alleged crimes including homicide and kidnappings aboard cruise lines.

A lot of crime at sea goes unpunished because the laws are so confusing. Crime aboard cruise ships is as a result of how the maritime law handles crime reporting.

For almost a century, cruises weren’t legally required to report any crimes. However, in 2010, former president Barack Obama signed a law called the Cruise Vessel Security and Safety Act. This law basically requires  homicides, suspicious deaths, missing U.S. nationals, kidnappings, and assaults to be reported to the Coast Guard and the FBI.

The law also says that ships are required to employ a “trained forensic sexual assault specialist.” They also are required to carry along rape evidence kits and anti-retroviral medication, which are medications for the treatment of infection, primarily HIV.

This is a very controversial issue , and it looks like there is almost nothing being done about it. This is a serious issue because NBC News reports in a recent investigation, that nearly 70% percent of the sexual assaults reported were minors.

These crimes happen often because the people committing them know that they are very rarely prosecuted. In addition, many of the crew members on board often take advantage of their power when faced with a minor, such as when a fitness instructor sexually assaulted a sixteen year old girl passenger aboard the Carnival Breeze. The crew members who commit these crimes are usually just fired and sent home according to Micheal Winklman, an attorney in Florida who specializes in maritime claims.