Drama Club: A Club for Everyone 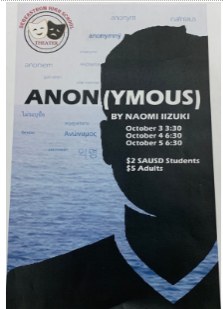 Segerstrom’s after school drama club is led by Sarah Owens, the drama teacher and club advisor. Drama club meets every other Monday in the B building room B101 right after school. In the Drama Club, one will be able to access various opportunities, as well as gain a community.

Ms. Owens, the administrator of the Drama Club, explained students who join love the club and want to be there. It is a place where different groups of students can come and bond over the arts. In Drama Club many still have stage fright and it may be difficult for students to loosen up and feel comfortable enough to participate at first, though this will change as they get further into the school year.

Drama club is a fun and safe place where students who love the performing arts can come together and be comfortable around each other. One of the Drama Club’s main goals is to help students be able to connect on something they’re passionate about.

Ms. Owens also talked about all the fun activities and games they play in Drama Club. Joining the Drama Club will also give students the opportunity to get involved in the Segerstrom after school plays. The fall play is coming up this October. When participating in the after school plays there are many different jobs you can take on, whether it’s helping sell tickets, technical work, or even performing.

Drama Club allows access to new skills such as social, technical, and even accountability skills when working on and with the after school plays. One major thing about Drama Club is you do not have to be a performer, there are many behind the scenes work available. If there are some students interested in the light aspects of putting on a play, they would have the opportunity to learn more about that here at Drama Club.

“I think Drama Club could be a really great place to find a home,” said Sarah Owens, the Drama Club administrator.

Overall Drama Club is a safe place where students with similar interests can come together and bond. Students will learn new skills and experience things that could be useful later on. Maybe even make some lifelong friends. The Google Classroom code for Segerstrom High School Drama Club is b2uks8v, anyone is welcome to join the club as well as Google Classroom for online updates.