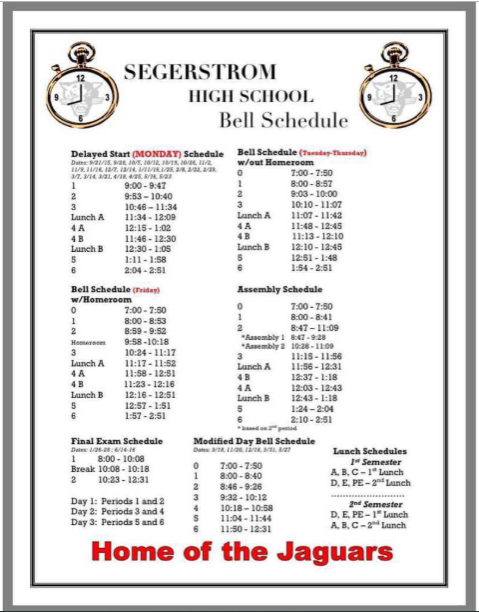 Bell Schedule 2019-2020: The new schedule includes changes that are greatly disliked by many.

With a new school year, many changes are expected. A big change that impacted the students was the introduction of the new bell schedule. It added homeroom and changed delayed starts.

The change in the bell schedule has created a debate among the student body. It ended up making many students more confused than ever with the absence of their agendas for the first month of school. As a result of this lack of agendas, students were unable to check when delayed starts began or what lunch students had on Wednesdays. The changes were made rather abruptly and should have included students in the process.

“I honestly do not mind the new schedule because it is the same thing except [for] homeroom being a part of it, but homeroom is better as we just get to hang out with people in our class,” said Ulysses Romero (10).

Another controversial change that was made was the fact that delayed starts would be moved to Wednesday instead of Monday. Some students were not happy with this decision as it affected the practically perfect setup they had created for Monday. Students could choose to either finish homework from over the weekend or catch up on their sleep.

“I do not like the new bell schedule because I feel like delayed start should have stayed on Monday since the weekend just passed and people will usually wake up late or be tired,” said Chelsea Zenteno (12).

Something that further confused students was the fact that 1st lunch now included E and not B building. This caused some chaos. For many upperclassmen, this change reminded them of the start of their freshman year with confusion everywhere. Personally, the lunch changes were something I was not fond of, especially with my confusion as to where I should be.

“I think the bell schedule is pretty neat but it’s gonna be pretty difficult to adjust, considering how some people are confused about what lunch they have or aren’t used to it,” said Danica Mendiola (11).

Overall, the bell schedule was not the best way to go as it affected every person in the school and seemed to cause more trouble than good. Though we still need to adjust, perhaps, in the future, students will begin to appreciate the change.

“I think it is confusing and it was very unnecessary for the school to change the bell schedule. Many students like myself are always questioning when the bell will ring if we have delayed start, or what lunch we have. I honestly think that we should go back to the old schedule because I prefer it over this one,” said Franchesca Lopez (12).