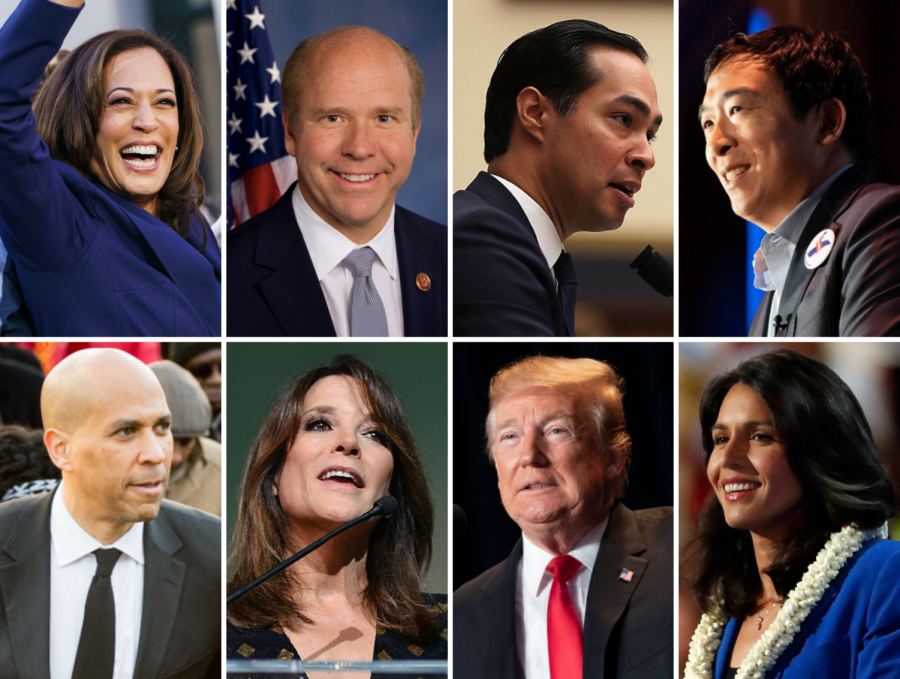 Future President?: The Democrats and Republicans have a lot of potential runners, all focusing on different policies. This year many more women are seen in the lineup. Photo courtesy of: Fox 4 Now

Future President?: The Democrats and Republicans have a lot of potential runners, all focusing on different policies. This year many more women are seen in the lineup.

While the Republican party is significantly smaller than the numbers of the Democrats, it still includes very strong candidates, including the current president. Donald Trump. He has been campaigning for his reelection even before he got inaugurated.

A former governor and U.S. House representative, Mark Sanford will be challenging Trump for the Republican nomination. The main issue he is fighting for is America’s debt.

Another challenger is Joe Walsh, a former representative in the U.S. House of Representatives for Illions. His main concerns are making a more secure border and defeating Trump.

The last Republican trying to secure the Republican nomination and go to the office is William F. Weld, governor of Massachusetts. He has endorsed the legalization of marijuana and wants immigration reform.

On the other hand, 12 Democrats are set to join the 4th presidential debate and 7 did not make the debate line-up but are still pursuing the presidency. Among the front-runners is former vice president Joe Biden. He is well-known for his personality and wants to, if he gets into office, fortify economic protections for low-income workers. As he has run for president twice before, he has considered this time his last time to run for office.

Another favorite is Bernie Sanders, Vermont’s former senator, wants to provide free Medicare for all and free college tuition. It is not confirmed if he will appear in the debate as he has stopped his campaign due to health issues.

The women who are participating in the election are Elizabeth Warren, Kamala Harris, Amy Klobuchar, and Tulsi Gabbard.  Warren is a favorite as well, according to Real Clear Politics. The current senator of Massachusetts is known for having a plan for everything and wants to make a change in America.

Harris, senator of California, is proposing tax cuts and has recently stated that she wants to provide 6 months of paid family leave. Klobuchar is a senator of Minnesota and wants to fight drug addiction as well as bring attention to the high costs of prescription drugs.

Gabbard is a congresswoman for Hawaii and a veteran. She opposes American military intervention overseas.

Pete Buttigieg is a mayor (South Bend, Ind.), a military veteran, and openly gay. He has put a focus on environmental issues and reducing income inequality.

Andrew Yang (Yang Gang), former tech executive and an entrepreneur, is advocating a universal income of $1,000 per month for every American.

Beto O’Rourke is a former congressman from Texas and has focused on immigration reform and wants universal background checks to obtain guns.

Cory Booker, senator from New Jersey and former senator of Newark, is for criminal justice reform and increased funding for education.

Julián Castro is a former mayor of San Antonio and was in Obama’s cabinet as Secretary of Housing, making him one of the youngest members of the cabinet. He is focusing on immigration as his grandmother was an immigrant and wants to implement a public pre-K program.

Tom Steyer, billionaire and activist, was not going to run for the presidency, but has decided against that. His main issues are climate change and to promote renewable energy. Steyer has spent his own money to push for Trump’s impeachment.

These are the candidates for the 2020 election.