Competition Between Apple Music and Spotify 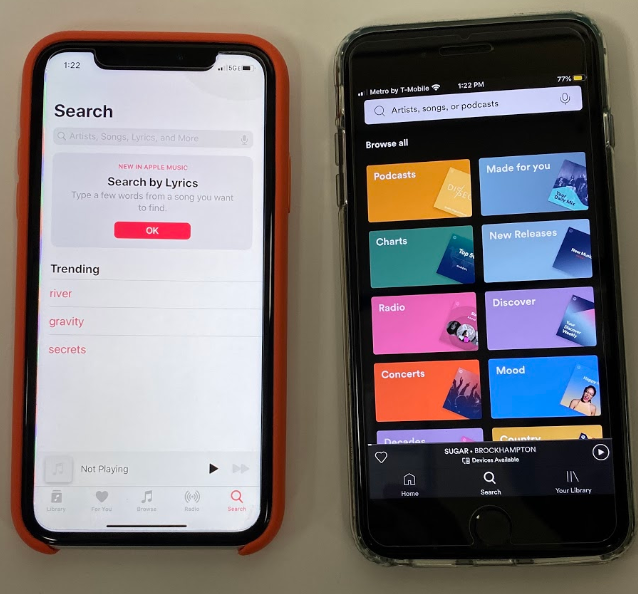 Competition between Apple Music and Spotify. Which music service app will overtake the other customers?

Apple Music and Spotify are well known streaming services in the music industry. Spotify essentially was created in 2006 and since then has gained over a million users globally. Apple Music in contrast was developed in 2015 and has been able to remain a competitor to Spotify, with the help of Apple’s popular iOS ecosystem.

Both Spotify and Apple Music offer as much music and related content, including exclusive new releases from top artists, personalized playlists, and feature exclusive internet radio shows and podcasts, of which can be streamed ad-free or downloaded for offline pay.

“I enjoy having Apple Music because it gives me access to any kind of music I want to listen to and it’s easier to afford,” said Emely Munoz (12).

However, Spotify music offers a free trial period of it’s Premium plan, it lasts up to 30 days before billing begins. Apple Music provides a three-month free trial service that can change into a paid membership if the customer does not decide to cancel it before the free trial service is over.

“Apple Music is the one music app I would use because it gives you a three month free trial and I think that’s a really great offer they can give to you so that you can try it out,” said Favian Ramirez (11).

Both music apps are quite similar because Apple Music and Spotify offer a Premium plan that costs $9.99 per month. Spotify users that have Premium are benefited with add-free services that allows users to shuffle play songs.

“Though Spotify music and Apple Music are the same prices, I suggest using Spotify because I like the lay out of it and it has more options to choose from,” said Claudia Vasquez (10).

The two services include student and family plans for $4.99 per month and $14.99 per month with up to six people that can access the services using a personal account for each family member. The family plans are very similar between Spotify and Apple Music.

“My family and I have a family plan for Apple Music and it has been a success in my family, listening to music on the app,” said Briana Ayala (12).

Both Apple Music and Spotify memberships automatically renew each month, but you can cancel the renewals at any time. If a user decides to cancel a Spotify premium plan, it can restore your account at the end of the next billing cycle to the free, ad supported product.

“I believe both music apps are very alike and I wouldn’t mind going to either because I have both the apps. It really just depends on the person on what they like or dislike from the two apps,” said Viviana Gomez (12).

Although, when it comes to offline listening, there are limits. Users of Apple Music can upload to their music library up to 100,000 songs. As for Spotify Premium users, they can only download music up to 10,000 songs on each of the 5 different devices, but the number of songs doesn’t include a saved playlist.