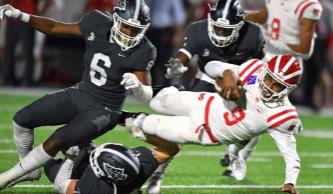 Bryce Young getting taken down by Bosco defense. Photo courtesy of: USA Today

On Monday, December 2nd, 2019 Mater Dei lost to John Bosco 38-24. They played at Cerritos College on a Saturday night. It was the last game of the season which was the last round of CIF Division 1.

“I think it went well, I feel like Mater Dei gave up at the end, Bosco took advantage of them. I thought Mater Dei was gonna win it all. Personality my favorite player from Mater Dei is Bryce young,” said Carlos Mora (11).

During the 1st quarter, the score was 14 from Mater Dei and 3 from Bosco. The whole game Mater Dei was up with the points until the 4th quarter things went south. Mater Dei had really high hopes at the beginning of the game. Bosco, overall, was just a better team that day and pulled through.

“It was fantastic, one of the best comebacks in football history. I really thought Mater Dei had this in the bag,” said Israel Escobedo (11).

It was St. John Bosco’s first time winning in 2 years against Mater Dei. They didn’t destroy them with a blowout but they did win. Since they’re in a different league, known as the Trinity League, they only play with the greatest schools in the country. Dj Uiagalelei really came through for his team at the end and made them win.

“It was a good game it was fair I was expecting for Mater Dei to win because, in my opinion, they’re the better team,” said Christopher Meza (9).