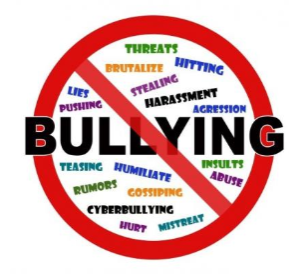 There’s really no guidebook to understanding the logic of bullies. No justification, excuse, or tragic background can make up for the endless amount of torment caused by bullies.

Webster’s Dictionary defines bullying as any form of treatment of someone in a cruel, insulting, or threatening manner. This can mean anything from incessant name-calling to cruel comments on social media posts.

No one is aware of the impact bullying can have on an individual unless they’ve been in that situation themselves, and even then everyone has different responses.

Some know their self-worth and take any forms of bullying with a grain of salt. Others lie awake at night wishing they could leave school out of fear for their tormentors. No matter the gravity of the situation or the response of the recipient, bullying is cut-throat and cold-hearted. It’s something no one deserves to be the victim of.

The sad part is, the vast majority of students have experienced one form of bullying or another throughout their school life. A number of these instances go unreported out of fear, not only of the bully, but that administrators won’t care.

At Segerstrom, bullying is rarely heard of, but that doesn’t mean it doesn’t exist on campus. One student recounts of a time a fellow peer was being tormented by two classmates. The student reported the incident on behalf of their peer to the teacher, but nothing was done.

Responses to cases of bullying vary from teacher to teacher and school to school. However, the fact that bullying is in fact on the backburner for a number of administrators is something that can not be ignored. Some administrators will view a girl talking behind another female student’s back as “typical girl issues.” But in reality, this is a form of bullying in itself. So the problem is, are we understating the issue, or normalizing it?

It’s a mixture of both. When we see “minor” incidents such as talking behind someone’s back and don’t automatically see it as bullying, we are ignoring the feelings of loneliness and despair brought upon the victim. And in turn, we justify the issue by labeling it as “typical.”

Bullying, as defined by Webster’s Dictionary, is ANY kind of cruel treatment. If that’s the case, why do we keep setting limits as to what can constitute as bullying?

The reality is, there is no guideline to understanding the logic of bullies. We can justify all we want, but there will never be an answer to satisfy us. Instead, what we can do is try to understand the feelings of victims in order to aid in their challenges. At the end of the day, it is they who deserve our understanding.