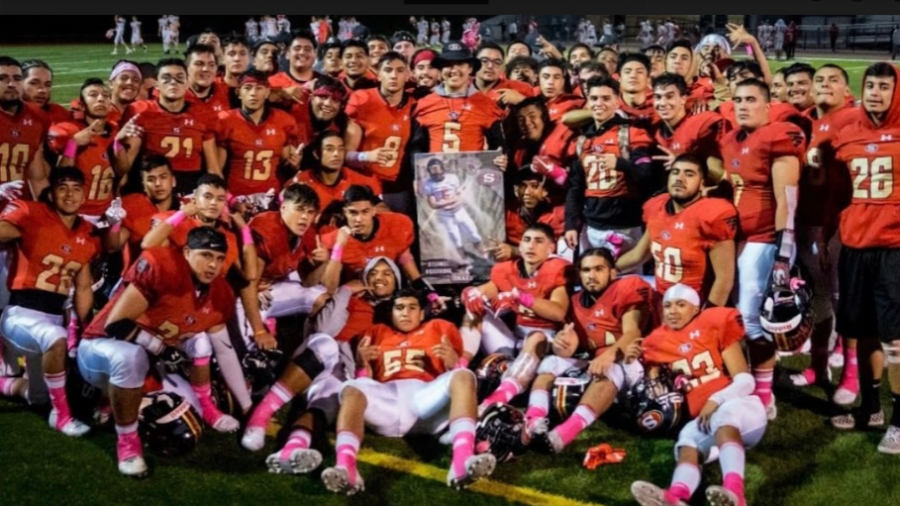 On August 14, 2019 Israel Escobedo, also known as OJ, a 16 year old student at Segerstrom High School was diagnosed with Acute Lymphoblastic Leukemia (ALL). Most teenagers these days are worried about who’s going to be asked to the next school dance or why someone hasn’t texted them back. But, in this case, Escobedo’s main focus was to overcome this battle. He had to put football, school, and his social life on pause. This was a very difficult period of time for the entire Escobedo family.

Israel only attended school for the first three days of high school his junior year. He didn’t get to settle in with his classmates or teachers.

“When I heard OJ had cancer, I honestly couldn’t believe it. The news hit me as hard as a rock. I asked myself, ‘Why him?’ Out of all the bad things I’ve done, he had to be the one with cancer. OJ and I met the spring of my sophomore year when he was brought up to varsity. Ever since then, he’s been my workout partner, my other inside linebacker, and my homie. OJ would have made a big difference in the team, he was the 2nd best linebacker (me being the first). He’s strong and he knew his plays. Israel and I would have killed offensive teams, ” said Raymundo García (12).

After many rounds of chemo, being hospitalized, and all the pain he’s been through, Escobedo’s family recently received great news. Israel Escobedo is now in remission, he will be receiving his last round of chemo on December 26, 2019. In the beginning of February, Escobedo will be receiving a bone marrow transplant. The donor being his sister, Genesis Escobedo.

“My first reaction to hearing it was straight tears, we were at practice and Coach Tag told us. I couldn’t believe it at all. I thought it was like a bad dream or something. It felt so fake I couldn’t believe it. I saw him at the hospital that day we went as a team. I felt so sad and it was a bad feeling seeing one of my closest friends going through something that I could never imagine. It made me want to work two times harder in season knowing he couldn’t play beside me. OJ would have made a big difference on the team. He was very talented and was a hard worker. Everyone would feed off his energy on the field and when they saw him work hard, everyone wants to work as hard as him and he showed flashes his sophomore year so we all know he would have been a big piece to the team,”  said Angel Vega (11).

During this hard time, OJ and his family immediately had everyone’s support, especially Segerstrom’s Varsity Football team. Every football game was dedicated to him. OJ always had his best friend (Ray Garcia) by his side.

“Well, honestly, when I first heard about it I was in shock and I was very sad, I started to pray every night for him and still do ‘til this day because I knew he would stay strong and fight through it. I remember OJ as an always smiling person, always positive, and as an Avatar. I do believe he would’ve had an impact to the team if he could’ve played. He and Ray García are like brothers, both big linebackers,” said Daniel Navarro (12).

The Escobedo family has had several fundraisers to raise money for the expenses of Israel’s medical bills. With everyone’s help and support, they’ve raised enough to cover the majority of it.

“When I heard about the news at first, I was in shock and in disbelief. The first time I went to visit OJ I felt like crying, but then I was happy at the same time. Now that I know he’s in remission, I’m excited because I get to see him play football again,” said Iverson Fuiava (12).

After taking a year off of football, he’s ready to come back his senior year better than ever.