Features Teens Dislike About Themselves 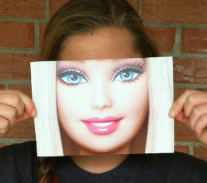 The feeling of not being pretty and needing makeup. Photo courtesy of: Google Images

Many people develop insecurities due to certain features they hate about themselves. For example, there are teens who dislike their body because they are overweight or because they are underweight and want to gain a bit more.

Others dislike their facial features, such as their nose, because they believe it doesn’t match up to the favored ‘button nose.’ Many celebrities have changed the way the look, influencing the way we perceive ourselves. Kylie Jenner, a socialite, businesswoman, and model, got her first lip fillers at the age of 17. She gained popularity after being featured in the reality show, “Keeping Up With the Kardashians.”

Even those who are conventionally attractive face insecurity, as the pressure to maintain their image toys with their idea of self worth. This can lead to depression, anxiety, and eating disorders in teens and children.

A lot of teens compare themselves to other people on the internet, and tend to feel insecure because that person looks ‘better’ in their eyes. Bullying can also play a huge role in the way someone feels about themselves. There are people who bully others because of the way they look, which can be a sign of their own insecurities. Bullies simply target others to project their own struggles without facing them. It’s not just about generalized bullying though, as making fun of someone because of an unconventional feature can do a lot to a person mentally, and it can give them a negative perception of who they are.

“I am insecure about my nose and my skin because I don’t like the shape of my nose, and I don’t like my acne,” said Nylah Bravo (11).