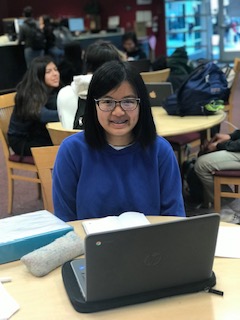 Michelle Phan, the winner of the Segerstrom High School’s 4th Annual Poetry Contest, smiles proudly at the camera after finding out she won the contest.

“Write a Poem About Nature,” said one of the many posters advertising Segerstrom High School’s 4th Annual Poetry Contest. “Think about the power and beauty of the natural world.”

With a focus on nature, in light of the incoming, existential threat of global warming, the contest asks students at Segerstrom to write an original poem. Some themes that the contest’s organizers hope to provoke include answers to questions like: what about nature or the environment inspires or connects with you? How does nature alleviate stress? Why do we turn to nature for solace?

In a not exactly subtle way, the contest hopes to raise awareness about environmental issues. “Each year, our team meets to discuss possible themes and we decided on nature because of the relevancy it has with current events. It is also a great topic to reflect on,” says Mrs. Conferti, an English teacher at Segerstrom and the organizer of the contest.

Inspired by a former student, Mrs. Conferi started the contest four years ago. This year, per usual, Mrs. Conferti was excited to see the level of content of the poems. “We were very impressed by the quality of the poems and were surprised that the majority of the poems were about the climate crisis.”

The winner, Michelle Phan, crowned Poet Laureate, is a 10th-grade student at Segerstrom. “My poem was about sunflowers in relation to the sun. It was about resilience, about how one needs to persist despite facing challenges,” Michelle explains. “I had actually written the poem in the summer. When I saw the contest, I thought my poem would be a perfect fit.”

That is actually the reason why Mrs. Conferti decided to create this contest- to provide an opportunity for artistically-inclined people like Michelle. “We feel that many poets and writers on campus didn’t have a creative outlet for their skills. Often times, our winners are students who don’t have a voice anywhere else on campus,” Mrs. Conferti says.