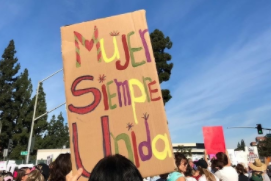 An example of a sign made by an attendee of the march, courtesy of Lesley Ballinas, our interviewee.

On January 18th, 2020, Orange County residents took to the streets to protest for women’s rights. The march took place on N Flower and W Santa Ana BLVD with streets being closed the entire morning. It was estimated that more than 11,000 women attended the march, which was an unexpected turnout after only a few RSVP’d online.

The event originated after Donald Trump took presidency in 2017, and his disrespectful attitude enabled the march to take place. This year, 100s of marches took place across the country with the same purpose. The march also pays tribute to the Million Women March of 1997, which was organized in Philadelphia with 500,000 attendees. The theme of this event was family, and what it means to be an African woman in America.

“Women and men don’t have equal rights as of yet. The Equal Pay Act is still being violated by employers, and the Pink Tax hurts women financially,” states Lesley Ballinas (12), a Segerstrom student and attendee of the march, “I don’t think skeptics have stepped out of their own shoes, feminism is intersectional.”

The theme of this year’s march is “March Today, Vote Tomorrow,” which highlights 2020 being the year of new political beginnings in the presidency. The solidarity created amongst different groups of women allows for the event to continue into its fifth year in 2021.